Former Polish lawmaker John Godson who holds Nigerian and Polish Citizenship, took to his Twitter handle on Thursday to announce that he would be participating in the Presidential race in the western African country
In 2023 for the President of his native country Nigeria.

Godson is an academic, community worker and manager. He was a member of the lower house of Poland’s parliament from 2007 to 2015 for the previous governing centrist Civic Platform (PO) party.

He was also Deputy Leader of the centre-right Poland Together party from 2013 to 2014.

He was also a pastor for the Church of Christ and an elected local government official in the Poland’s Łódź from 2008 to 2010.

Early in the year 2014, he had made an unsuccessful run for Mayor of Łódź.

Notably in the year 2015, he was named among the 100 most influential people by the New African magazine.

Distinctly, on November 14, 2016, he was honoured with the Bene Merito Award by the Polish Foreign Ministry for his contribution to strengthening Poland’s position in the International Arena. 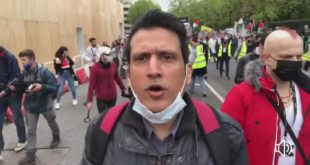