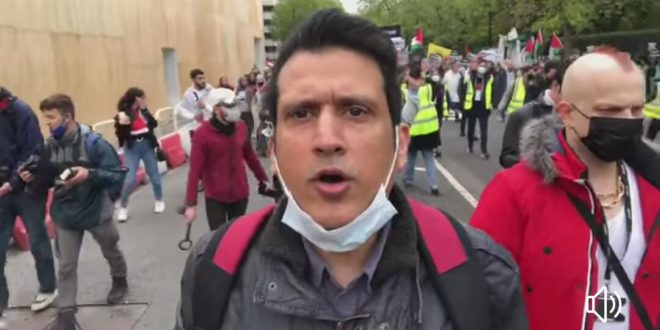 In a bid to condemn the Israeli military attacks on Gaza, thousands of protesters took to the streets in London on Saturday to oppose violence in Israel and to show solidarity with Palestinians in Gaza, while hundreds marched from Hyde Park to the Israeli Embassy in Kensington.

Reportedly, atleast 126 people have been feared killed in Gaza and seven people killed in Israel.

The demonstration in London was organised by Palestine Solidarity Campaign, Friends of Al-Aqsa, Palestinian Forum in Britain, Stop the War Coalition, Campaign for Nuclear Disarmament and the Muslim Association of Britain.

According to the Organisers of the March, they were protesting against evictions of Palestinians from Sheikh Jarrah (a predominantly Palestinian area of East Jerusalem), the bombing of Gaza and the deaths of Palestinian civilians.

They called for the UK government to take “immediate action”, saying: “It must stop allowing Israel’s brutal violence against and oppression of the Palestinian people to go unpunished.”

In London, videos showed protesters waved Palestinian flags and shouted “Free Palestine”, with others chanting “Israel is a terror state”.