In a fresh development in the wake of the explosive laden SUV found outside the residence of Industrialist Mukesh Ambani and following the arrest of Mumbai API and Encounter Specialist Sachin Vaze existing Commissioner of Police Param Bir Singh is being shifted to Home Guard.

IPS Hemant Nagrale will take charge as the new Mumbai Police Commissioner.This announcement was made by State Home Minister Anil Deshmukh on Wedneday and comes against the backdrop of the meeting between NCP Supremo Sharad Pawar and Maharashtra Chief Minister Uddhav Thackeray on Monday.

Hemant Nagrale was Maharashtra’s director general of police in January. He earlier served as the Navi Mumbai police commissioner from May 2016 to July 2018. He also worked as the joint commissioner of police (administration) in the Mumbai police force, special inspector general (admin) in the DG office and special inspector (general) at the Maharashtra State Electricity Distribution Company Limited (MSEDCL).

Nagrale, is a 1987-batch IPS officer had also served as deputy inspector general of police (DIG) of the Central Bureau of Investigation and superintendent of police (CBI) during his central deputation. 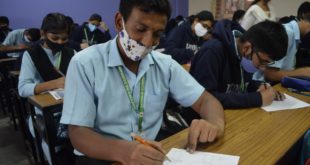